This is a cover that I just purchased from Canva. It’s a one off purchase, to be used just for this blog post, but I really wanted to get an image of a new character that I’m thinking about. Her name’s Hester and she lives in early Victorian England. Her mother dies in the first scene of the story, killed by her drunken father, and she is left alone to raise her sisters in poor conditions in a village on the outskirts of London.

She discovers that she has a ‘talent’ for helping the sick and needy, and quickly builds a reputation as a witch…..

That’s all I have for the moment BUT I’m thinking of linking Hester with a modern woman, to see how that would evolve.

Read the first ‘bones’ of the story and feel free to add any suggestions…all thoughts/ideas gratefully accepted!

They were at it again. Hester pulled the rough woollen blanket over her ears, snuggling up to Elsie’s warm back. Her nose tickled against her sister’s curls as she drew her near; small and bony against her own hips. Then it sounded again; the incessant banging of the bed against the chalk wall, just feet away from where she lay with her sisters. Elsie moaned in her sleep, restless but not waking, her breathing heavy. Her younger sister had always slept through any storm. The thin sheet that separated them from her parents moved as her father stood up, and Hester sighed with relief, their rutting over.

She heard him pull on his boots, then the heavy thud as he walked to the doorway. The sound of the door opening, and then silence. She could picture him leaning against the doorframe. The smell of tobacco filled her nostrils and she squeezed her eyes shut, hoping for sleep. Then, the squeak of the bed, and the whispering of her mother, calling him back to bed. Winifred stirred and called out in her sleep. Hester prayed that her father had not heard her, but the blanket opened and her mother stood, silhouetted by the dark grey of the skyline through the open doorway. She stood for a moment, listening. Hester held her breath, hoping that she would go back to bed. When there was no further sound from Winifred, her mother disappeared beyond, and she could hear her father return to bed.

Then, the only sound was the wind outside, rattling on the window above their trestle bed. An owl hooted, eerily near. The bed on the other side of the blanket yielded to the weight of its occupants, then the familiar thudding of the frame against the wall started again.

Hester opened her eyes in panic. What had woken her? She sat up and looked across at the dark mounds lying next to her that were her younger sisters; they hadn’t moved. She sat for a moment, listening. Then, the wailing noise sounded again and her heart gave a thump in her chest. It sounded like a cat, perched outside, but she knew the noise anywhere; it was her mother.

‘Quiet, will you?’ A gruff voice pierced the silence, and Elsie stirred and sat up. Hester placed a hand on her sister’s mouth, Shush!

The wailing started again, followed by a thud as her father hit her mother. She could hear her fall onto the wooden floor, and pictured her, sprawled out under the window.

‘Please, Ed; not again. I beg you. I may be with child; I cannot stand it!’ she wailed again.

He ignored her wails as he continued to hit her. Again, and again, the steady thump of fist on face, breasts, hips, legs. Hester felt the knots fill her inside, as she held onto Elsie, stilling her sobs.

The wails seemed to go on forever, then stopped. Hester heard the door open for the second time that night, then slam shut as her father left the house.

‘You stay here, do you hear? Not a sound mind!’ she whispered to Elsie, who nodded, shaking and pale in the dim light. Winifred hadn’t stirred. Hester could hear her heavy breath through the silent night, her chest sounding raspy from a recent bout of cold.

She crawled out of bed, gingerly pulling back the thin blanket that divided the shabby room. The bed loomed in front of her, filling this corner. A thin light pierced the room from the smeared window set high above the bed, allowing some light from the pale grey sky. A chair sat in the far corner, roughly hewn by her father some years back. It held a candle and usually her father’s jacket and breeches, but they had gone. Hester adjusted her eyes to the breaking dawn and peered over the ruffled sheets. Her mother lay on the floor, unmoving. Hester could see her bare feet in the light, a blanket across her face. She moved around the bed, glancing outside where the door had opened slightly; there just the distant chink of bottles from the public house and the bleak call of a rooster from the farm opposite.

Hester pulled at the blanket covering her mother’s face, then gasped. Her head was at an angle, seemingly removed from the rest of her body. Even in this light she could make out the bruises across her eyes, already puffy and dark. A slick of blood could be seen around her nose and mouth, spilling onto her soiled dress. Hester moved closer, stepping on a sticky mass at her feet, trailing under the bed. The smell of shit was overwhelming as she realised her mother had soiled herself.

She turned and pulled at the door, then retched into the open air. The sun had appeared from behind the rooftops allowing her a clearer view of her feet, dark and smeared in dirt and vomit. She had seen enough pigs slaughtered on Haskin’s Farm to recognise the blood on the edges of her dress.

Working quickly, she washed her feet under the pump in the narrow alleyway, walking back inside. Her mind felt numb, her senses dulled by the sight before her.

He had gone too far this time.

Wildlife in the city

Down in Surfers Paradise the humans rule. Singles, couples, families, seniors and toddlers….you name it….they gather at the bright lights, cafes, shops and nightclubs to be thrilled and entertained.

Amongst the human revelry however, and if you look up to the sky for while, another species is thrilled by the bright lights and the promise of some nibbles.

This lorikeet is just one of a small gaggle of birds perched on the sills and rooftops of the buildings. I took this snap as one flew down looking for leftover pizza. He was not a bit perturbed by my curiosity, so I was able to take a close up…..he even seemed to pose for me!

Christmas is a very special time of year. It is a time for reflection, forgiveness, rejoicing, giving and receiving. It is a time when we look at our own humanity and quietly look forward to the future. Whatever religion, race, culture or view you have, we need this time, set at the tailend of the year, to understand where we are in the whole epoch of the world. Some look at the events around the world and despair at our need to cause destruction. Ultimately though, we need to look back, rejoice, and move forward optimistically in the unknown that is the new year 2017.

A stroll on the water’s edge

Main beach is a gorgeous beach sat neatly between the iconic Spit outcrop and lighthouse and the more commercial Surfer’s Paradise. It’s often overlooked for that very reason and merely glanced at from passing cars as they head to the more popular spots for coffee and maybe dinner. People like to walk along the Spit, dogs and children trailing along beside them, or they prefer the bright lights and atmosphere of Surfers.

So, we decided to stop and take in the relaxing mood of Main Beach. The bathing pavilion just at the back of this image dates back to before the Second World War and is part of the Queensland Heritage Site. Today, you may enjoy a coffee and a breathtaking view of the ocean whilst watching the bathers stroll by.

The bronze statue in the image is called Melody, and depicts an ethereal water nymph, created by the sculptor Frank Miles, forever surveying the ocean in front of her.

A lovely piece of history for the Gold Coast, usually taken up by the glamour of the highrises further along the coastline. 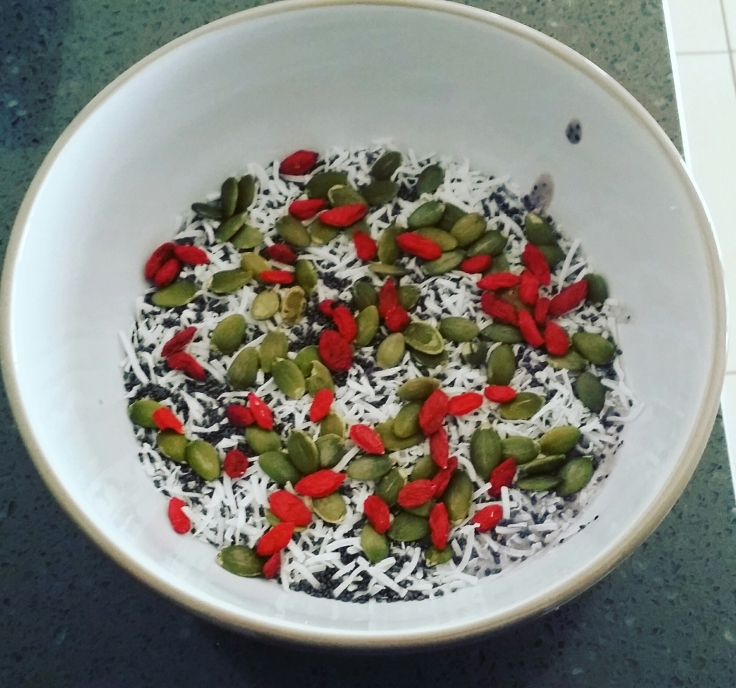 A new craze in our house are smoothie bowls. My daughter started the idea, and my son, whose home for the holidays from Melbourne, has taken it up too.

So everytime I go shopping Jess has to come with me. She scours the markets for fresh fruits and seeds and nuts with exotic names such as Goji and Acai seeds. I had never heard of most of them until recently, but now am an expert on walnuts, pumpkin seeds and coconut flakes….

My son decided to be a vegetarian a year or two back, so I had to look for tofu and veggie option burgers and meals. So now it is my daughter’s turn.

I suppose its about asserting their individuality.

I prefer eggs for breakfast myself.

Does anyone have family who have health/eating fads?

Last night we went out for dinner at Sanctuary Cove, a plush harbor teeming with exclusive boutiques and fancy restaurants. One of our favourite eateries is George’s Paragon, a Greek reataurant, which has Lamb souvlaki to die for and a selection of creamy desserts.

After dinner, we took a stroll along the pier to watch the boats moored to the harbor, waiting for a trip up the waterways of Brisbane river. A stage and a pop up market set the Chrismassy theme, and we watched as people sang noels under the heat of a Queensland sun.

My daughter Jessica wants to go to art college when she leaves school. She has three years to go before she graduates, but is already creating some lovely art pieces. This is a collage of recent work, from an art book called Querkle, in which she chose the colours, drawings and the best way to display the work. These are on her wall, alongside a cloth fairy and a signed picture of the pop group One Direction, which she wants to take down and store away instead……! Time to put away childhood crushes and find her niche in the world….☺#vangogh #rousseau #klimt #davinci

CreateSpace vs. Ingram Sparks: Choosing The Best Printer Service For Your Books – http://wp.me/p4h3m4-1NQ