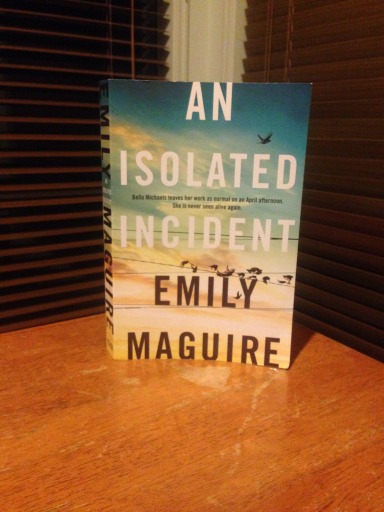 The premise of the book grabs the reader immediately;

-Bella Michaels, 25 years old and a care assistant in a nursing home, is brutally murdered and left on a secluded road outside the small town of Strathdee,

-the town is naturally stunned, no more so than the victim’s devastated older sister Chris, a barmaid in the local pub,

-Chris plunges into deep despair and depression, is suspicious of every man who walks into the pub, and starts having visions of her dead sister,

-Added to that, the media descends on the town and the usual circus ensues.

I plunged myself into this read with enthusiasm and anticipation, and I was initially not disappointed. BUT as the book unravels, the focus leans more towards the two main characters -Chris the sister, and May the reporter, rather than the actual murder itself. I wanted to know more about the murder, but instead got viewpoint’s from Chris (real good character development, if a little unlikable) and May the reporter (also flawed).

There are themes of domestic violence, misogyny, the media treatment of murder victim’s especially young women, BUT then it became not so much a thriller as a drama.

The attack became secondary to the development of the characters – not a bad thing in itself, but this, to me, was a psychological drama.

Are you a fan of the song YMCA by The Village People? Or do you hate it?

I neither hate or love the song YMCA. In fact, it reminds me of the kids film Despicable Me, when the minions dress up as the YMCA pop band itself. Good vibes really.

The six sounds I love :