Have you dreamed of writing a novel? Set a timer for thirty minutes and free write! Write whatever comes to mind, then take just a few moments to do some simple editing such as correcting grammar and spelling.

Then grab a cool drink and relax. Sit down and read a good book. You’ve worked hard and completed the June 1-30 Challenge for 2016! Congratulations!

Books I recommend (and loved!)

Phew! That challenge took longer than I expected, but I hope you enjoy glancing down the list. Happy reading !!

On a recent trip to my local shopping mall, I discovered that they’ve opened a new Lindt chocolate shop. Yum!!

Needless to say, my daughter and I were straight in there, with a basket in our hands and an excited look on our faces (my hubby sat on a bench outside, moaning that ‘its no good for you, I don’t eat it anyway).

We chose a white chocolate coconut bar (why wouldn’t you?) and drooled over the massive bags of chocolate balls for a mere $60 dollars.

In the old Glen Miller song “The Chattanooga Choo Choo” the train departs on Track 29.

Have you ever ridden a train? Write a post about a train. Tell us about train ride you have taken or one you’d like to take. Make up a story about a train or write a poem featuring a train. Share pictures of trains. Your choice!

One of the most endearing toys that my son played with as a boy was Thomas the Tank engine. The show on the TV was wildly popular too, and there was barely a nursery, kindy or creche around the area that did not have a Thomas sitting in the corner, waiting patiently to be taken around the tracks by a child. He had a set of engine friends who chugged around the small hamlet of Sodor with him;  Edward, Henry & Gordon.

Here are some fun facts about Thomas:

June 28, 1914. Archduke Franz Ferdinand of Austria, the heir to the Austro-Hungarian throne, was assassinated in Sarajevo along with his wife, Duchess Sophie. This assassinated started a domino effect resulting in World War I.

Or write about The Big Game from your high school or college days.

Maybe you don’t like game playing, especially in relationships. Write about that.

Alternative: Write about your favorite pizza. 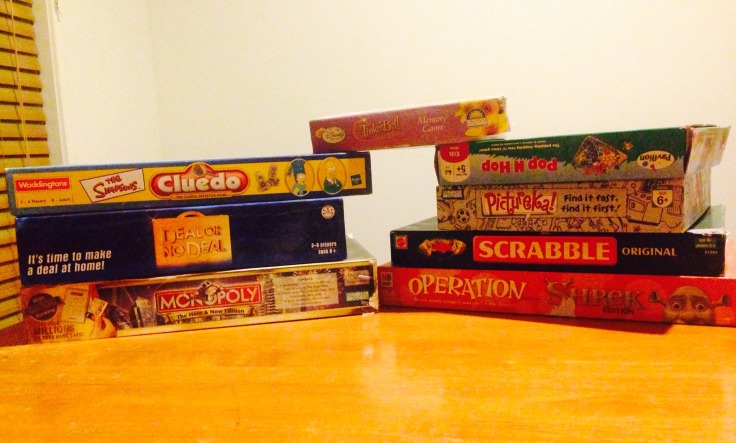 This is just a few of the games that my children have in the toy cupboard. More have been collected over the years and include Mr Potato Head, Barbie and Action Man toys, as well as Hungry Hippos, card and board games, Cranium and the Bronco Billy game (a favorite of mine, in which the donkey kicks of objects that are placed on his back, by means of a spring).

I discovered in a recent post that games go back centuries, and children have been playing them for years, from the Ancient Egyptian and Roman civilizations, through to the Victorian and modern times.

The earliest board game was invented by the Egyptians  (around 3,000 BC!) and was called Senet. It was very similar to our modern game of Dice, having painted numbers and drawings on blocks

Forward to modern times, and the most popular games today are to be found on Playstations, PCs, and Xboxes and include ; Grand Theft Auto V, Fallout 4, Pokemon X, League of Legends, and World of Warcraft (which has been turned into a film, I believe).

It seems our enjoyment of games is the same today as it was for our ancestors.

Selling Your Book In A Post-Factual, Post-Brexit World

The dream book for any author 🙂

I have written the best book. My book will be bigger than the bible. It will make cynics laugh, optimists cry, and toast. Before he died, David Bowie said he wished he had written it.

It is impossible to say what my book is about without revealing a shocking twist which has never ever been done before, so people will have to buy it to find out. Anyone who doesn’t understand my legitimate reasons for secrecy is a potential terrorist.

Book jacket quotes will come from Ellen DeGeneres and the Dalai Lama.  Bono, James Joyce and Donald Trump will offer quotes, but be politely refused. The New York Times  will ask to syndicate it.

Genre doesn’t matter because absolutely everyone will want to read my book. People who haven’t read it will pretend they’ve read it, but get eviscerated at brunch parties for not understanding it properly. They will then pay someone else to go and buy it…

June 27, 1927. On this date the United States Marine Corps adopted the English bulldog as their official mascot.

Alternative: Write a poem with 27 words or syllables.

Holly stood next to the film director, a clipboard in her hand.

‘Cut,’ yelled Mr Spielberg, as she walked over to the set. ‘That’s it folks, lunchtime.’

The actors stood chatting to each other, tired after a long morning on the shoot.

‘Hey there, girl, make yourself useful and grab a bottle of water can you?’ The most arrogant actor that she’d ever encountered stared at her from behind reflective shades.

Holly shuffled off, reaching the trailer in record time. She grabbed a water, heading back.

She could hear the actor even from this distance, shouting at a young lad named Michael. Holly shuddered; he was a thoroughly despicable man! No wonder everyone called him Alf behind his back; A for a**hole.

Holly stepped into line at the lunch queue. Up ahead, the dishy new actor called Chad stood next to his female co star, a European model who’d decided to go into films.  Holly had a crush on Chad, ever since she’d seen him in that vampire film last year, where he’d spent most of the film with his shirt off. His poster adorned her bedroom at home, and he filled her dreams.

That was why she was so pleased to have got this job, working for Spielberg himself. It meant that she had a chance to ogle Chad to her heart’s content.

In front of her the little actor named Vance smiled.

‘Hey there Holly, good to see you. How long are you working on set?’

‘All summer,’ she replied, glancing over to where Chad sat next to the model. They were picking on their salads and mineral water, whilst looking at their reflections in the glass door of the trailer.

‘There she is, just the one I was looking for. Get me a salad will you, darling.’ Alf the a**hole sidled up behind her, thrusting a $50 note in her hand. ‘No anchovies,’ he smirked, sauntering away to the rest area.

Spielberg appeared behind her. ‘Hey there Mr Cage.’ he called. The actor turned at the sound of his name. After all, he was working for one of the world’s great directors.

‘Come and meet my daughter.’

June 26, 2016. Marathons are being held today in Kailua-Kona, Hawaii; Santa Cruz, California; Lubec, Maine; and Arlington, Virginia. The race in Arlington is indoors.

I’m not doing any of them. I may run or ride a few miles, though.

A marathon is 26.2 miles. Marathoners don’t start out running 26.2 miles! They start small and train for it. They work hard to reach that distance.

Tell us about something you worked for. Something you thought you might never accomplish, but you did.

If you have actually run a marathon, you can write about that!

I don’t do marathons. The furthest I walk is to take my terrier dog Billy around the block for his daily ablutions. Even then some mornings I just open the patio door and tell him to ‘do his business outside!’

Writing is my MARATHON. I’ve spent 50+ years growing into the person that I am today (mentally, not physically, may I add), from the inklings of thoughts, diaries and school poems that have been written, to get to my goal. My writing marathon has not ended, no siree; its just started. (I hope that by writing this down, I have not jinxed myself!)

Eighteen months ago, I took a wring challenge; a marathon of writing 500 words for a month. I took the challenge, and by the end of the month had written well over 15,000 words (you do the math), and my passion for writing was reborn.

Now, I write about anyone and anything. Everything inspires me, from a simple article in a local newspaper or magazine, to gossip from my friends and family; its wonderful.

As we speak, I’m in the middle of four written projects; my third book in A Celtic Trilogy (unnamed), a murder mystery that I’m really excited about, a book that’s inspired from my mother’s childhood in WW2 and editing Alice’s Secret (the second in A Celtic Trilogy).

June 25, 1967. Broadcasting of the first live global satellite television program took place on this date. It was a show called Our World.

Without the invention of the camera, we would not have television.

Today is your last photo challenge! This one may seem difficult, but you can do it!

Using your camera, take a video about Your World and share it.

Alternative: Post a gallery of 25 photos that have a shared theme. You can cheat a bit on this one and post five galleries each with five photos having a shared theme. 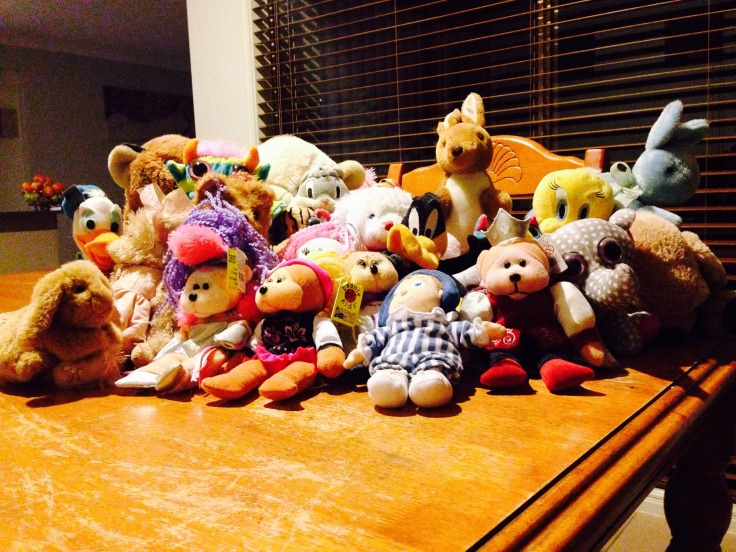 This picture is just part of my daughter’s toy collection. We have bought and collected toys for her over the years as we have traveled around and at Christmas/birthdays. She went through a stage when she loved the cute beanie kids, so she has a few of them, plus toys that we’ve bought in the Warner Bros shops and Disney stores.

A brief history of toys

-In the 16th century, wooden toys were still popular, along with games such as ‘cup & ball’

-The first dolls house was made in Germany in 1558

-By 1693, board games involving dice and letters were encouraged, to improve learning of the alphabet

Henry the eighth valued a male heir. He wanted one. He wanted a wife who could give him one. He left the Church and created his own church so he could get divorced and marry a new wife.

Twenty-four carat gold is valuable. Some value riches above all else.

Tell us what is valuable to you. What do you treasure? Write about your treasure.

We arrived in Australia exactly ten years ago on the 6 June 2006. We had two children and two suitcases in tow, and a bunch of qualifications tucked into our hand luggage.

We were full of hope and excited for the future. Australia was booming, and the job section of the newspapers was so thick, they had to split the papers up. I had a nursing job within weeks, then Jeff worked shifts in a furniture factory. The kids settled into a local school (and has firm friends from there to this day). We spent each weekend in our car, travelling up and down the coast, stopping at picturesque beaches, exploring lush green rain forests and  visiting such towns as the hippie Byron Bay in NSW and the Sunshine coastline north of Brisbane.

Then, after two years of exploring, we took off and traveled across this vast continent, not stopping until we’d reached Perth.We drove through two time zones, crossed the Nullabor Plain (so called because nothing and no one lives there, but I beg to differ), spotting emus, kangaroos, rabbits, then drove around pristine white beaches that bordered Western Australia from the azure blue of the Indian Sea.

Memorable moments that I will TREASURE, involve:

These are memories that I will always TREASURE spent with the people that I TREASURE most in the world; my family.