God of our fathers, known of old,
Lord of our far-flung battle line,
Beneath whose awful hand we hold
Dominion over palm and pine—
Lord God of Hosts, be with us yet,
Lest we forget—lest we forget!

Early this morning my daughter Jessica and I went to the Anzac Day service held in the next suburb of Coomera. We arrived as early as possible, and were glad, as there was hardly anywhere left to park. People of all ages had made the effort to attend and to honour the soldiers who had fought for us in The Great War of 1914-1918.

The service started with a parade. A brass band led the procession down Reserve Road with the aim of finishing at the cenotaph. Behind the brass band, the Anzac soldiers marched, silently and respectfully, in perfect sync with each other. Then, school children from the local schools proudly held up banners. Mums and dads pushing toddlers and babies took up the rear. A smart Jaguar car cruised down the road and seated in the front, proud as punch and waving to the crowds, a war veteran smiled, his medals displayed for all to see.

Then the service. The local councillor for the area held court, respectfully reading out the casualties of 1915, particularly Gallipoli, the campaign on the coastline of Turkey that cost the lives of over 25,00 ANZAC casualties alone.  Then, the local clergy said The Lord’s Prayer and we sang hymns of Remembrance for those that were lost. I found the Military Address to be poignant, as the present day soldiers honoured their past comrades, be it a hundred years ago, the memory of those men lives on.

The Last Post was played and we observed a minute’s silence.

To end the service, the representatives from the clergy, dignitaries and soldiers alike laid wreaths under the lone soldier memorial statue, in front of the engravings of the local lads who had perished in the fields of Turkey and France, as well as around the world, then and since.

I am so glad that we went and paid our respects in what for me, was an emotive morning. 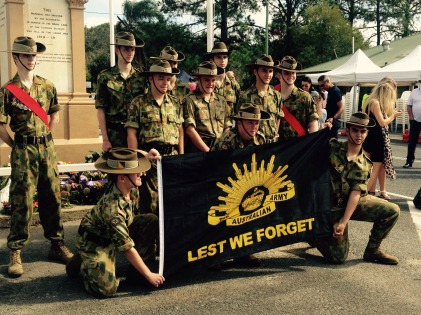